Solar power has been around for about seventy years and it has had its share of critics. Most of the objections are based on misinformation or outdated features of solar, such as its high cost. Often critics point to a small inconvenience of solar energy but neglect to properly weigh that against solar energy’s many vital benefits. Some critics are thinly disguised coal, gas or nuclear industry mouthpieces, all of whose business models are being seriously challenged by solar and wind power. They are right to feel the heat from solar and now solar battery storage.

Contrary to what critics say, the generation of electricity by the sun’s rays is clean, inexpensive, carbon-free, safe, reliable, plentiful, renewable, low maintenance, quiet, efficient, healthy, democratic, decentralized, and economically stimulating. It creates export-proof jobs, promotes equality, and removes some of the motivations that have caused wars in the past hundred years or so. Todays’ solar panels are even more aesthetically pleasing than those of the past. If we have grown to accept the look of asphalt shingles on our roofs, we have no basis to object to how a shiny piece of all black glass looks on our roof.

Solar batteries are a recent part of the larger solar conversation. What job does a solar battery do? It stores the solar energy created from your rooftop solar panels. The promise of batteries has been around for a long time. Now that the dream of storage has been realized, it is important to include storage when you get your home solar installation. The number one reason is battery storage included in your solar installation qualifies for the same federal tax credit as all the other pieces in the installation process. Now that is a deal.

Solar battery storage gives you peace of mind. If the electricity goes out, you do not have to worry about losing all the food in your fridge, freezer, or heaven forbid the wine or beer fridge. You can still work on your computer. You cannot run the air-conditioner, but you can run the fan. You cannot watch your big screen, but you can charge the family’s small screens.

There are nevertheless two real problems with solar power:

These are real problems, but they can both be overcome. Notice first that they are both distribution problems, that is a problem involving a cost, a benefit, a resource, a burden not being where or when we want it to be.

The second one is the problem of the distribution of energy over time. Though plentiful, solar power is intermittent. We do not always have access to sunshine. If we needed power at a different time, or if we were somewhere else, we could have access to solar energy and would not need coal, gas, or nuclear power.

Like all other distribution problems, these can be solved by saving and storage.

Banks provide the solution to solar’s first distribution problem. People who don’t need their money at the moment save it in a bank. Others can then borrow the funds to buy solar systems and save. If the cost of borrowing is less than the solar savings, then the financial distribution problem is solved.

Better Tomorrow Solar has carefully cultivated relationships with several Georgia and national banks and other financial institutions to help our customers do exactly that. We will guide customers who want to finance their solar systems through the available options. We are dedicated to guiding our customers through the associated paperwork. Better Tomorrow Solar does not benefit from our customer’s choice of financial products. Our advice is always motivated by the customer’s best interest.

A solar battery is a solution to intermittency

Our focus here is solar energy’s second distribution problem, that of coordinating supply and demand of power. Much like a financial bank, a battery bank solves the intermittency problem by saving energy not needed now for later use. Recent advances in battery chemistry have been spurred on by the proliferation of laptop computers and cell phones, and more recently, electric cars. Today’s batteries can go through thousands of charge cycles. They need little to no maintenance and are now typically warrantied to perform for 10 to 12 years. Best of all perhaps is that battery prices have fallen around 85% in the last decade, making batteries as part of a solar installation an attractive financial proposition. More recent advances in battery technology, such as redox flow batteries, hold out the promise of solving solar energy distribution problems on a utility-scale. In doing so, batteries will soon displace coal, gas and nuclear not only because they are cleaner, but also because they are, or soon will become, cheaper.

How do batteries save money on power bills?

Many customers are on, or can easily switch to, power rate plans that have different rates at different times of the day. The utility company can supply one kilowatt of electricity in the middle of the night at a much lower cost than on a summer afternoon when the demand for power peaks. Utilities rely on gargantuan power plants which can produce immense amounts of power cheaply. The downside to the big plants is that they cannot be quickly turned on or off. It takes days, even weeks to turn them on. So they are simply left on all the time. These plants supply the baseload demand, or the amount the utility predicts its customer’s minimum cumulative demand for some period, usually around a week. At night the demand often falls below the baseload. The result is an overproduction of power. Every kilowatt produced but not consumed at night simply goes to waste. So utilities offer low prices at night to encourage consumers to shift more of their demand to the late-night and early morning hours, usually around 11 pm to 6 or 7 am. That is why some appliances have timers to delay their start.

On the other hand, utilities often lose money selling power at peak demand times. They need to turn on smaller plants to meet demand over the baseload. The nimbleness of the smaller or peaker plants comes a high per kilowatt price.  That extra cost is often more than they can charge the customer. The solution for them is to charge higher rates at peak times to discourage demand during those times. The varying rate plans are often called Time of Use (TOU) plans. The difference between on-peak and off-peak rates can be significant. For example, Georgia Power’s current off-peak residential TOU rate is 1.4 cents per kilowatt, while their on-peak is at 20.3 cents per kilowatt; that is 1,435% more! Other utilities have similar rate plans.

The price variation in TOU plans are designed to address the distribution issue utilities face in meeting cumulative demand and the limitations on how they generate electricity. The TOU plans also provide an opportunity for a battery owner to save money by buying and storing power in the batteries when rates are low and drawing from the saved power instead of buying from the grid when prices peak. This can be easily programmed into today’s battery control system and be done daily to maximize savings—no additional monitoring required. Though an owner can monitor the system on a cell phone application, the battery will operate as programmed whether monitored or not. It will save you money whether you check it or not. Most people obsessively check their new batteries state of charge for the first few weeks and then slowly forget about it until the next time the owner realizes there is a blackout in the area because all the neighbors are sitting in the dark.

Adding solar panels will make it possible for the batteries to charge from the sun as well as off-peak grid power. This allows the system to make even smarter decisions about when and how to charge up. Keep in mind that the peak rate hours are in the afternoon when sunshine is most direct and available.  The battery controller can be set to tap into the battery bank for what it cannot get from the solar panels to meet the customer’s current on-peak demand. This reduces the chance of drawing power from the grid at high on-peak rates even further.

The tax advantage of a solar battery

In addition, adding solar to a battery installation allows the customer to be eligible for the Federal tax credit for both the solar system and the battery backup. The credit is 26% through 2020 but will go down to 22% in 2021 and 0% thereafter. It is worth emphasizing that this is a tax credit and not a tax deduction. It is a dollar for dollar reduction of the bottom line tax liability and can be carried over for up to five future years. Businesses that adopt solar, with or without batteries, can take advantage of accelerated depreciation of the installation cost.

Peace of mind from a solar battery

Saving money is not the only concern for those who install batteries. Batteries also provide backup power in the case of power outages. Contrary to a popular misconception, having solar panels alone does not provide power to a house during a blackout, even if the sun is shining bright and the panels are producing at the full capacity. During a blackout, power generated from solar panels fed into the grid will create an unsafe condition for an unsuspecting line worker working to restore power. It would not be obvious to a worker that there is power coming into the grid from solar panels on someone’s house. To prevent shock to the worker, therefore, solar systems are, by electrical code, required to cut off power from the panels during a blackout. That restriction does not apply to battery banks. Batteries, like fossil fuel generators, can provide backup power for critical household loads such as food refrigeration, lighting, etc. Unlike dirty fossil fuel generators, however, batteries do not need frequent maintenance and refueling and they operate silently with no smelly fumes. A battery bank by itself can provide backup, but a solar system by itself cannot. And only solar plus batteries makes the system eligible for the Federal tax credit.

A well-designed solar system with a battery bank on a TOU rate plan then has multiple benefits. Better Tomorrow Solar is certified with a variety of leading battery manufacturers and can offer customers the choice of leading battery brands. We have developed calculators in which we can input a customer’s consumption patterns to predict expected savings and return on investment. What our calculators cannot calculate do, however, is to predict how many of your neighbors will want to come over and hang out at your house during a blackout when your lights are on and theirs are not.  You are on own your own with that one! Good luck! 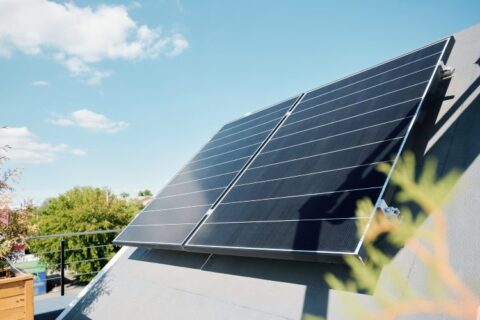 As solar energy becomes more popular and more affordable, it may be time for you to consider utilizing this technology in your business.