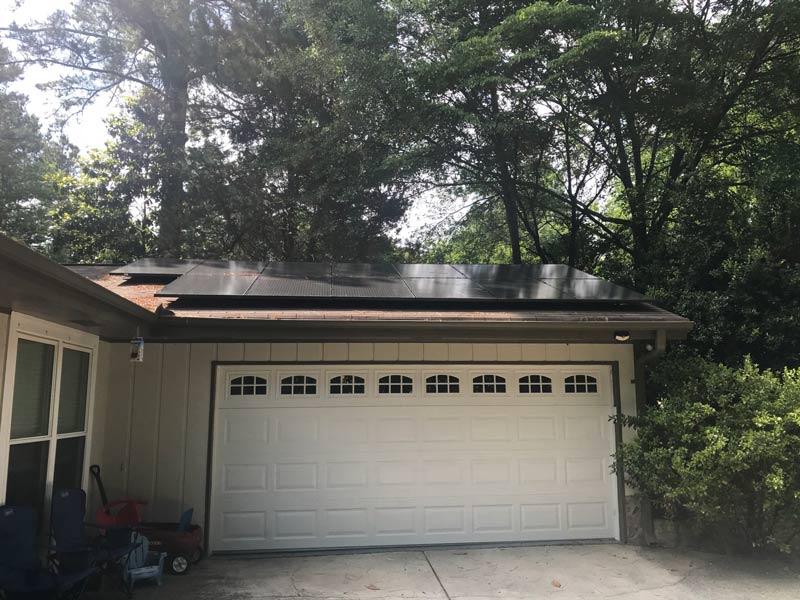 On a Monday evening this past November, I sat in our neighborhood’s Architectural Review Committee meeting, nervously waiting my turn. I’d heard horror stories from people in my climate advocacy group about months-long battles with their HOAs and losing friends in the neighborhood after finally getting permission to install solar panels. Our HOA’s guidelines (which I’d learned were, fortunately, less set in stone than bylaws or covenants) stated that no solar panels should be visible from the street, but for our house, which is surrounded by tall trees, the only parts of our roof where panels would get a decent amount of sun exposure would be visible from the street. Two of the team members from Better Tomorrow Solar were kind enough to come to the meeting with me, and we were prepared with arguments about the urgency of the climate crisis and the sleek, aesthetically pleasing design of the panels. Andrew was nervous that I was going to want to move if our request got denied. I assured him that we didn’t need to move, I just wasn’t going to take no for an answer. When my turn came, I launched into my prepared reasons why our solar plan should be approved. The committee chair asked if people had questions, and the only one was asking if we were planning to cut down any trees (we weren’t), and then to my amazement, the committee unanimously approved our plan!

Rooftop solar could provide 31% of all electricity used in Georgia, but only 64 out of every 100,000 homes in Atlanta has a solar roof. I’m happy that HOAs seem to be turning the corner on being open to rooftop solar. Denying residents the right to install solar panels because some HOAs consider them an eyesore seems to me akin to telling someone they can’t wear their oxygen nasal cannula because it’s unsightly. There’s no way we will have a livable future without tapping every possible renewable energy source to get ourselves off of fossil fuels. I think solar panels are beautiful. I feel a little rush of dopamine every time I see them on a home or business, and I feel the opposite whenever I see a large roof glinting in the sun with no solar panels to harvest that sunlight’s energy. I was happy to learn that home solar rooftops are contagious, even more so when visible from the street, and can’t we all get behind something that we want to transmit to each other these days?

Georgia is home to the largest solar panel assembly plant in the Western hemisphere. The price of solar energy has plunged to a mere 4% of what it was 15 years ago, making it cheaper than coal or natural gas. So why aren’t more homeowners adopting it?

I think part of it is people just don’t realize that it’s an option for people on the regular electric grid, or they feel daunted at starting the process. Getting started is actually super quick and easy with no commitment–you don’t even have to make an appointment. Better Tomorrow Solar created a free rough proposal for us (design of where panels should go, price quote, and estimate of energy generated/return on investment) based on google earth, then tweaked it based on a quick drone flyover at our house. They broke down the estimated environmental benefit of our solar panels in equivalent terms of trees planted or cars taken off the road, which was pretty cool to read. Most other solar companies also offer a free proposal. Because our house is fairly shady and surrounded by tall trees, our return on investment is relatively long at ~21 years. But don’t be discouraged–the average in Georgia is 10.8 years. We appreciated that Better Tomorrow gave us a conservative estimate of energy generated, which was lower (and turned out to be more accurate) than the government’s PVWatts calculator. Once we got approval from our HOA in November, we signed a contract and Better Tomorrow ordered the materials and completed the installation in December, in time for us to take advantage of the 30% federal tax credit for 2019 installations (the tax credit is now 26% for 2020).

Another reason I think people in Georgia in particular are hesitant about installing solar is that our state has not, historically, had policies that are financially favorable for solar homeowners. GA has not been a net-metering state, but that is changing this year. Net metering policy affects you if you have a solar system but are still connected to the GA Power grid. If you buy a battery storage system to connect to your solar system, you can store energy captured during the sunny hours to use during the night and/or during a power outage. We didn’t want to pay for a battery storage system, so our solar system is connected to the grid, and energy produced by our panels goes first to power our home real-time, and then excess goes to the grid to power other homes. During the night, on cloudy/rainy days, or any time our home electricity use exceeds what our solar system is producing real-time, we use and pay for electricity from the GA Power grid. As you can see in the curve below from our handy enlighten solar app, the majority of solar energy produced in a given day happens in the span of a few hours of peak sunlight. 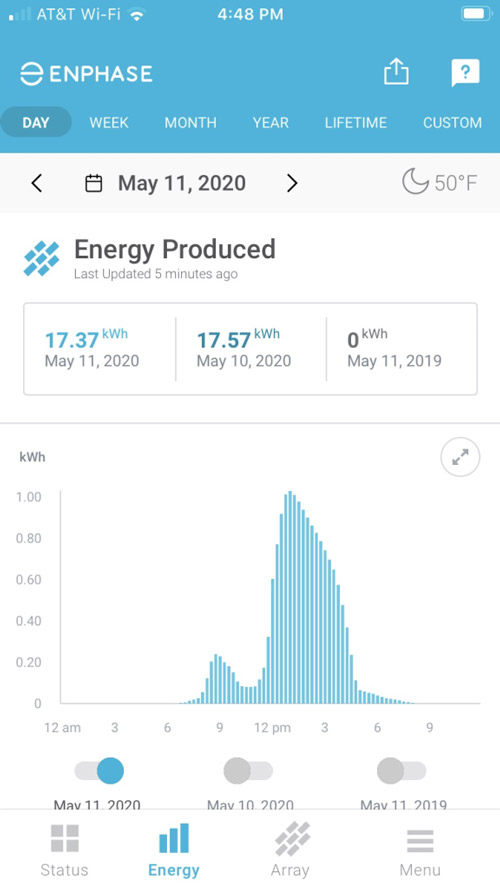 You can try to strategically run your dishwasher, washing machine, etc. during that time, but inevitably, if you don’t have a battery storage system, you’re going to be sending electricity to the grid during sunny hours and buying it from the grid during not-sunny hours. GA Power traditionally has paid homeowners only a fraction of the price per kWh of energy produced as excess by solar panels compared to what they charge customers to use their electricity. Net-metering means they pay the same for your excess as they charge you to use their energy when you need it. Fortunately, they have adopted a net-metering policy for the first 5,000 applicants this year, and I think there are plenty of spots left. It has not gone into effect yet, but it is supposed to be retroactive, so we should be recouping the money we’ve lost from their original policy back to the beginning of 2020, and this should improve our return on investment by two to three years. Essentially, net-metering acts in a similar way to free battery storage, although it doesn’t have the advantage battery storage does of being a backup during a power outage.

Transitioning from fossil fuels to renewables is crucial to stem the tide of the climate crisis, and as solar power allows us to let go of coal, we get an immediate benefit in decreased air pollution. Renewable energy is also a powerful social good and can be especially beneficial to people with lower incomes whose financial stability is often at the mercy of high utility prices. Better Tomorrow Solar recently constructed a solar array on a low income multifamily apartment building in Atlanta as part of a study to see if reducing energy costs can improve tenant stability, and they hope this will encourage landlords to increasingly install solar as a draw to tenants. They are one of two women-owned solar companies in Georgia and are donating profits for solar contracts signed through July 31, 2020 to local COVID-19 and post COVID-19 relief efforts, regardless of payment and project completion dates (and they are running sales now on solar panels and batteries). They have social distancing policies in place to be able to complete projects safely, and even last fall before the pandemic was a concern, we had very limited contact with the team as the vast majority of the project was completed outdoors, with a little bit of electrical work done in our garage and in our attic.

Solar power alone is not enough to make most homes carbon neutral. Reducing a home’s total energy use (which I’ll get into in detail in future posts) is extremely important too, as are utility-scale solar and other renewable energy projects. But it is a key part of getting us away from destructive fossil fuels, and there’s really not a downside to harnessing abundant, cheap, clean solar energy and then using it on-site. France passed a law in 2015 requiring new buildings in commercial zones to have solar panels or plants on their roofs. I hope that we pass more legislation incentivizing and pushing us towards solar roofs. But we don’t have to wait for that. With the price of solar energy lower than coal and the urgency of the climate crisis becoming ever more apparent, there’s no time like the present to make your roof a piece of the puzzle of a sustainable world.